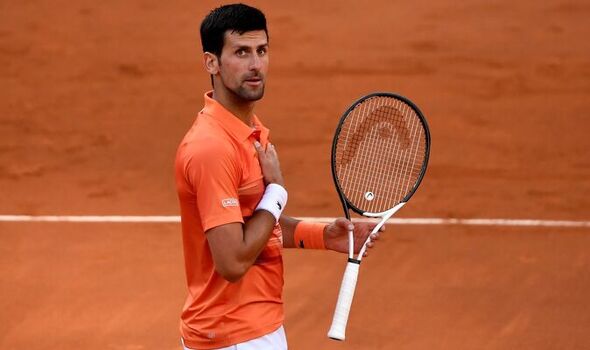 Novak Djokovic has noticed the impact Rafael Nadal’s ex-coach and uncle Toni has had on Felix Auger-Aliassime’s clay-court game. The Serb faces the Canadian in the Italian Open quarter-final, and is also playing to hold onto his world No 1 ranking.

It will be a first career meeting between Djokovic and Auger-Aliassime on Friday as the pair face off for a spot in the last-four of the Rome Masters. It is a fourth consecutive clay-court quarteinal showing for the world No 9, who also reached the quarters in Barcelona, Estoril and Madrid.

And the 21-year-old’s recent form on the dirt hadn’t gone unnoticed, as the five-time former champion in Rome noticed the impact that Toni Nadal had on Auger-Aliassime’s development. The Canadian started working with Rafael Nadal’s uncle and former coach last year, and Djokovic said: “I think he’s been improving a lot on clay. He’s been working with Toni Nadal for last couple years, who has definitely been contributing to his game on clay.”

The world No 1 was also complimentary of the former ‘Next Gen’ player, saying he thought he was one of the best of his generation. “Well I’ve known Felix now for quite a few years, obviously he’s an established top 20, he was top 10 player as well, so he’s right up there,” he said.

JUST IN: Nadal told he can reach 25 Slams as he looks to take back French Open

“Very complete game. Very nice guy. Works hard. He’s one of the leaders of the next generation.” The top seed defeated old foe Stan Wawrinka on Thursday to advance to the last-eight in what was their 26th meeting and first in almost three years with the Swiss star making his comeback from double foot surgery.

Now ranked down at world No 361, Wawrinka got his first match win in 15 months in the first round over Reilly Opelka before backing it up with another three-set win over Laslo Djere, and Djokovic was happy to see his former rival back. “It’s great to see a big champion like Stan back, winning two matches after a long time,” he said after his win.

“We all know how important he has been for our sport in the last 10 years, winning three slams, being an established top-five, top-10 player for many years. Only he knows how difficult it was with all the surgeries and injuries he had to deal with.

“So of course you can see on the court that he’s slower than he was when he was playing at his best. I’m sure with his team he’s doing his best to get himself in the best shape, but it takes time. It’s also match play versus practice sessions, completely different.”