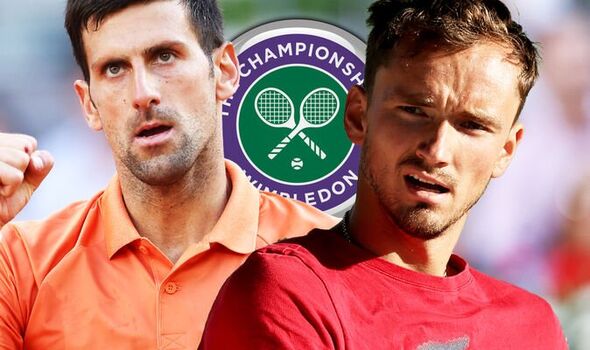 Wimbledon has been told their ban on Russian and Belarusian tennis players was the wrong idea, with world No 1 Novak Djokovic deserving to be barred over his unvaccinated status instead. More than 11,000 Express Sport readers voted in a poll and claimed the All England Club weren’t right to ban Russians, while also saying the defending champion should not be allowed to compete.

The All England Club recently confirmed a blanket ban on all Russian and Belarusian players in response to the war in Ukraine. During their spring press conference, the Chief Executive and Chairman also confirmed that vaccination was not a requirement for the tournament, meaning defending champion Djokovic would be allowed to compete after he was kept out of the Australian Open.

But Express Sport readers believe Wimbledon should have reversed their decisions, allowing players from Russia and Belarus to compete but banning the six-time champion. 59 per cent of the 11,694 responses stated that the Serb should not be able to play over his vaccination status.

55 per cent said Wimbledon were not right to ban Russian and Belarusian players, with a staggering 75 per cent agreeing with the likes of Andy Murray and Rafael Nadal’s decisions to speak out against the controversial decision. Murray, a two-time champion at SW19, admitted he couldn’t support the ban despite understanding the reasons behind it.

JUST IN: Nadal admits last win over Shapovalov was ‘a joke’ ahead of rematch

But the former world No 1 added: “People are forgetting about the reasons for why Wimbledon or tennis or sports are in this situation, and it’s because there is a war going on in Ukraine and that there is people getting murdered and killed and raped. That’s the bigger picture. So it’s a really, really difficult one. I feel for Wimbledon, I feel for the players and I feel for everyone that’s affected by it in Ukraine and around the world.”

Nadal, also a two-time former champion, slammed the ban as unfair but noted that the British government left the All England Club with few options. “It’s very unfair to my colleagues, they aren’t to blame for what is happening with the war. I feel sorry for them and I wish it wasn’t like this. In the end, we know that this is what it is. When the government puts measures in place, we have to follow them,” he said.

While it was bad news for the Russian and Belarusian players, it was good news for the defending champion who has won the last three editions of the tournament. In the spring press conference All England Club Chief Executive Sally Bolton confirmed: “The requirements set out by government to enter the UK do not include mandatory vaccination, therefore whilst of course it is encouraged, it will not be a condition of entry to compete at the Championships this year.”