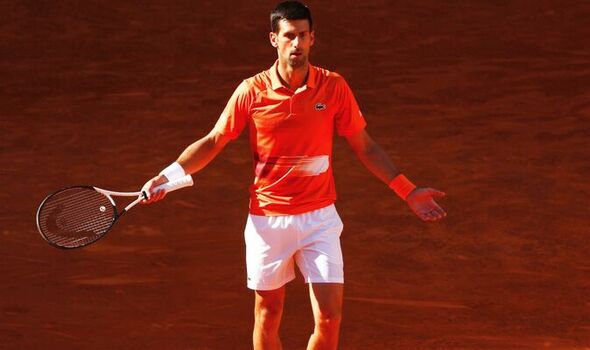 Novak Djokovic has spoken out on his loss to Carlos Alcaraz after leading the world No 9 by a set in their first meeting. The 19-year-old came from behind to oust the top seed and three-time former champion 6-7(5) 6-4 7-6(5) in three hours and 35 minutes, just one day after defeating Rafael Nadal for the first time.

Djokovic was looking to reach his second final of the season in Madrid, where he is a three-time former champion. He had a tough test in his first meeting with Alcaraz, the teenage sensation who has enjoyed a stunning 2022 – breaking the top 10 and winning three titles in the first five months of the season.

The world No 1 came from a break down to lead the seventh seed by a set but eventually fell in a final set tiebreak, and after the match conceded that the Spaniard deserved to beat him. “Congrats to him. He held his nerve very well. For somebody of his age to play so maturely and courageously is impressive. He deserved to win,” he admitted.

But the 20-time Grand Slam champion was disappointed not to close out the match in straight sets, as he had break point chances at 4-4 in the second which would have allowed him to serve for the victory. He continued: “I had a lot of chances a it was a fantastic match. Great battle. But I’m definitely disappointed with not being able to use my chances in the second set.”

JUST IN: Madrid finalist is richer than Federer, Nadal and Djokovic combined

Explaining how the recent Barcelona Open champion had managed to defeat him, Djokovic added: “His kick in altitude here is huge, and it was just difficult to deal with his ball, and I wasn’t feeling my return from that side. He was serving a lot of kick just to put himself in a good position.”

While the 34-year-old was disappointed to lose after starting the match in the lead, he also thought there were more positives than negatives from his week in Madrid as he continues to find his form after playing just three tournaments all season prior to this week. “I definitely played very good tennis, I mean, the best that I have played this year,” the 86-time title winner said.

“Probably when the disappointment of losing this match passes, I will have a lot of positives to take away from this week.” The world No 1 will now head to Rome for next week’s Italian Open.

It is his last chance to find some more form ahead of his quest to defend his French Open title. Djokovic reached the final in Rome last year where he lost to Nadal. The Serb got revenge just weeks later in Paris, where he downed the 13-time French Open champion in the semi-final en route to the title.