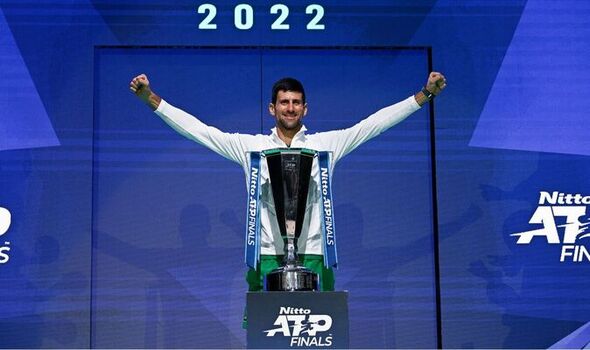 Novak Djokovic’s coach has explained the reason why the 35-year-old is becoming “even better” after he was tipped to dominate in 2023 after ending the season with a record-equalling sixth ATP Finals title. The world No 5 is said to already be thinking about his preparation for next season as he continues to chase history and is training better than he was over a decade ago according to Goran Ivanisevic.

Djokovic capped off an unprecedented 2022 season by capturing his sixth ATP Finals crown, allowing him to tie long-time rival Roger Federer’s record. He also became the oldest man ever to win the year-end championships as he won the title for the first time since entering his 30s, with his last run to the trophy coming in 2015.

And the 2001 Wimbledon champion admitted that it was helped by a change in the tennis landscape, with people retiring in their early 30s when he was an active player. “The will to practise, the will to improve, the will to be better is amazing,” the Croat continued.

JUST IN: Rublev claims he wants to be a ‘better person’ after ATP Finals

“He’s taking care of his body. In my time we stop tennis with 30, 31. You were already old guy ready to leave. But now unbelievable. Look at Roger couple years back. Look at Rafa. Look at him.” Ivanisevic also dismissed the idea that a younger generation was coming to steal the crown from the Big Three as he said his charge would remain a favourite for the big titles until he no longer believed.

He added: “They all talk about, yes, young players are coming. It’s great for the tennis. Few of them, you have youngest No 1 in the world who made unbelievable things this year, Carlos. But look at Novak. He’s still hungry, he’s still winning the tournament, playing unbelievable tennis. He’s still already thinking now about preparation for next season. Till he’s like that, in his mind he’s going to be always competitive, favourite to win Majors and the big tournaments.”

Ivanisevic’s words come as Djokovic has been tipped for huge success in 2023 after an rollercoaster season that saw him start 2022 getting deported from Australia before ending it with five more titles under his belt, including a seventh Wimbledon and sixth ATP Finals trophy. Retired pro Greg Rusedski tipped the Serb to win at least two Grand Slams next season and return to the top of the rankings following his win in Turin.

“I see Djokovic winning at least two Majors next year,” the former world No 4 told Prime Video, also tipping Rafael Nadal to win the French Open and Carlos Alcaraz to potentially defend his US Open title. And Rusedski added: “From Wimbledon onwards he has been brilliant and he is on a mission again. Watch out, No 1 in the world this time by Wimbledon guaranteed next year.”