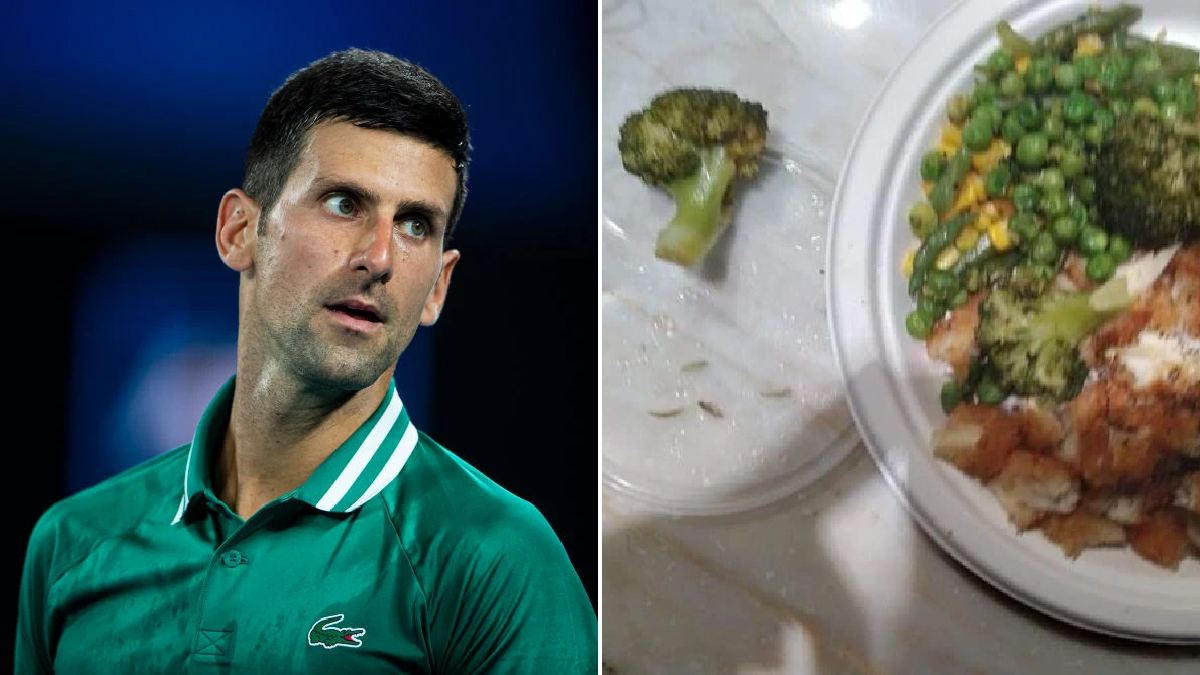 The detention hotel which Novak Djokovic is staying at has been accused of serving meals with maggots and mould to asylum seekers.

Tennis’ world No.1 is being held at the Park Hotel in Carlton, Melbourne, after his visa was rejected on Wednesday evening.

The 34-year-old is now facing the prospect of being deported after the Australian Border Force claimed that he ‘failed to provide appropriate evidence to meet the entry requirements’.

Djokovic was detained for several hours at Melbourne Airport before being transferred to the Park Hotel located in the suburb of Carlton.

But the hotel, which is been used to house government detainees seeking visas to Australia, has been widely criticised by asylum seekers who are being held there for its poor conditions and food quality.

Last month, photos emerged on social media of meals which were allegedly served to detainees that included live maggots next to a bowl of chicken and broccoli, and mouldy pieces of bread.

‘I was just shocked. The food they’ve been delivering is putting people in danger,’ Mustafa Salah, an Iraqi asylum seeker who is being held at the hotel, told SBS News in December.

‘Even an animal cannot eat this type of food.’

Hossein Latifi, who is also staying at the facility, claimed he was sick after eating the food.

‘Two times I did vomit. I also vomited from a tuna meal a few days ago,’ he said.

Ian Rintoul, a spokesperson at Refugee Action Coalition, said he was ‘horrified’ by photos he saw of the mouldy bread and maggots.

‘[The maggots] were alive in the plastic dish… people refused to eat it and demanded that it be taken away,’ he said.

‘There was no other food bought to replace it. So they either ate the maggot-infested food, the mouldy bread or went hungry. Most went hungry.’

Last month, two fires broke out at the hotel and a person was taken to hospital after suffering from smoke inhalation.

The hotel also suffered a Covid outbreak in October with 20 of the 46 men being held in the hotel testing positive.

‘Everybody is very tired, everyone is very angry,’ Salah Mustafa told The Guardian.

‘We are feeling like animals, like we are in a cage. They [the Australian government] are mocking us… they don’t care.’

Another detainee told the newspaper: ‘We have been here nine years and we are dying. We are very, very scared.

‘Every day there is another case. There is no safety and no rules. Here it is very bad. It is closed, there is no fresh air, it is a small place. There is not any doctor.’

Serbia’s president, Aleksandar Vucic, has now pleaded with the Australia’s government to allow Djokovic to move out of the hotel and into private accommodation.

Djokovic has been ordered to stay at the hotel while a final decision over his deportation will be made on Monday.

‘What we could do is, I spoke with him last night first, this morning for the second time, in accordance with the agreements we have, [Serbia’s prime minister] Ana Brnabic is just on the phone, pleading for one thing, to allow Novak before the final court decision on Monday to leave that infamous hotel and stay in a house he rented, to be able to move,’ Vucic said.

‘That is what Novak has asked for from his country, it is our obligation to protect our citizens. I talked to him last night and this morning, our ministry is involved.’