Home » Tennis » Osaka fined for French Open media boycott, on track for up to $130k in penalties during tournament

Naomi Osaka’s first press conference boycott has earned the world No. 2 a $US15,000 ($19,460) fine and condemnation from the four grand slams on an eventful opening day at Roland Garros.

Osaka and the stunning first-round exit of two-time French Open runner-up Dominic Thiem stole the show on what was a quiet day for Australians at the French Open. 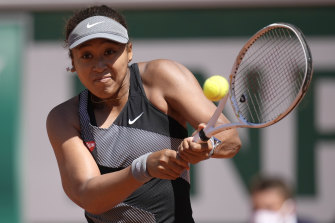 Naomi Osaka says she will not take part in press conferences at the French Open.Credit:AP

The only Australian in action was Ajla Tomljanovic, and the world No. 76 cruised to a comfortable 6-2, 6-4 win against Kateryna Kozlova in just under two hours on court.

While Tomljanovic’s win was pleasantly uneventful for Australian tennis fans, the start of Osaka’s press conference boycott was far from it.

Before the tournament started, Osaka triggered a polarising debate by revealing she would not partake in post-match press conferences.

After her first round 6-4, 7-6 (7-4) win against Romanian Patricia Maria Tig, Osaka completed a short, on-court interview.

But she did not partake in any media conference with journalists at Roland Garros and was subsequently fined $US15,000 ($19,460).

Following this, the world’s four grand slams — the Australian Open, French Open, Wimbledon, and US Open — released a statement saying the mental health of players was of “utmost importance”.

“Naomi Osaka today chose not to honour her contractual media obligations. The Roland-Garros referee has therefore issued her a $US15,000 fine, in keeping with article III H. of the Code of Conduct,” the statement read.

“The mental health of players competing in our tournaments and on the Tours is of the utmost importance to the Grand Slams.

“We want to underline that rules are in place to ensure all players are treated exactly the same, no matter their stature, beliefs or achievement.

“As a sport, there is nothing more important than ensuring no player has an unfair advantage over another, which unfortunately is the case in this situation if one player refuses to dedicate time to participate in media commitments while the others all honour their commitments.”

But that pales in comparison to her potential winner’s cheque – just over $US1.7m ($2.2m).

While Osaka continues to make off-court headlines, the primary on-court story after the opening day’s play was about Thiem.

Having fallen to 13-time French Open champion Rafael Nadal in the final at Roland Gorras in 2018 and 2019, Thiem was afforded a favourable draw at this year’s tournament.

He was the only player to have won a grand slam in his half of the draw.

But after establishing a two-set lead against Spaniard Pablo Andujar, Thiem produced four consecutive unforced errors on serve halfway through the third set and was broken to love. 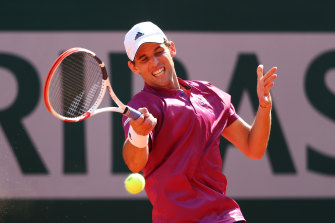 Dominic Thiem of Austria plays a forehand in his first round match against Pablo Andujar of Spain during day one of the 2021 French Open at Roland Garros.Credit:Getty

He dropped the third set and never recovered. The shocking 6-4, 7-5, 3-6, 4-6, 4-6 loss was his first to a player outside the top 30 at Roland Garros and the first time he had fallen short of the quarter-finals in six years.

“I was not struggling at all with my motivation, but the game was just not there today,” Thiem said post match.

“All the shots are missing power. They are not accurate enough. I’m not moving well enough, so everything in my game has some per cents missing.

“I don’t really know why, because since I stepped back on court it’s already been two months, and I was really practising well, super intense as well.”

Andujar was more impressed with his recent win against Roger Federer at the Geneva Open.

“For me, he is like a myth,” the Spaniard said of Thiem.

Thiem’s loss leaves the bottom half of the men’s draw wide open, but he wasn’t the only star to fall on day one.

Grigor Dimitrov was forced to retire due to a back injury in the fourth set of his first-round clash with American Marcos Giron.

The 2016 Australian Open winner fell in the first round at Melbourne Park this year and failed to fire a shot at Roland Garros.

The 6-2, 6-4 defeat to Ukrainian qualifier Anhelina Kalinina leaves the German’s career at a crossroads.

On the Australian front, John Millman, Jordan Thompson and Chris O’Connell will all begin their tournaments on Monday night.

Ash Barty, Alex de Minaur and Alexei Popyrin will have to wait another 24 hours for the start of their campaigns.

Sports news, results and expert commentary delivered straight to your inbox each day. Sign up here.