One side effect of the pandemic has been a steep hike in Novak Djokovic’s visibility. Not his renown among tennis fans – that was already established – but his familiarity among people who keep one ear on sports bulletins at the end of the news.

Through his anti-vaccination rhetoric, plus his organisation of a carefree exhibition event at the height of the first wave of COVID-19, Djokovic showed himself to be a contrarian; a man prepared to swim against the current. 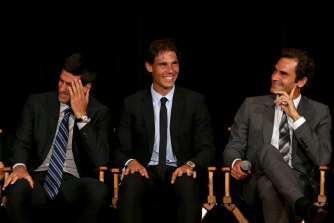 Admittedly, this is not as marketable an identity as Roger Federer’s white-tuxedo glamour, or Rafael Nadal’s matador machismo, but there were plenty who admired him for his refusal to conform. The whole process has closed the gap, profile-wise, with those giants who came before him.

So, where do the big guns stand on this week’s Melbourne controversy? Federer is absent. Nadal is clearly unimpressed. Where lesser players have stayed tactfully neutral on Djokovic’s medical exemption and subsequent detainment, Nadal was more direct, telling reporters on Thursday: “If [Djokovic] wanted, he would be playing in Australia without problems [by getting vaccinated]. He makes his own decision.”

We are unlikely to hear Federer speak on this issue for some time – if at all – as his bad knee is keeping him off the tour. His stance on vaccinations has been clear, however. “I got the Pfizer,” he told reporters in May 2021. “Above all, I did it for others because I don’t want to give it [COVID-19] to anyone else.”

Federer views the vaccine as having wider benefits beyond personal self-interest – a logical leap that Djokovic has never seemed to make.

Their respective positions on COVID-19 fit what we already know about the “Big Three”. On a personal level, the dynamic between Federer, Nadal and Djokovic has never been that of an equilateral triangle. Rather, the two older men sit close together, while the Serb is a man apart.

So, will this latest brouhaha affect the way they go about their tennis, and their collective determination to claim major title No.21? Up to a point. None of these men needs any further motivation to win their global game of hopscotch because you do not get this far without being an alpha competitor. But the internal tension adds extra spice.

Each member of tennis’ three musketeers owns 20 grand slam titles. It is a fair bet that Federer would rather Nadal finishes on top than Djokovic, even if his own chances of landing another major – as a 40-year-old with a gammy leg – are vanishingly small. Yet time is closing in on these ageing allies, with Nadal having lost much of last season to a foot problem. Barring some catastrophic loss of form or fitness, Djokovic is the man most likely to break the deadlock – perhaps even in Melbourne in a little over three weeks’ time.

Is there real animosity here, or just professional rivalry? The world’s top players are experts at discretion, to the point where their team members often have to sign non-disclosure agreements. Still, it is clear that Djokovic remains a gooseberry in the great “Fedal” bromance.

The odd hint crops up on the court. You might remember Federer scoffing that Djokovic had beaten him via a “lucky shot” at the 2011 US Open, or telling Djokovic’s parents to be quiet during a match in Monte Carlo three years earlier. More telling, though, is the ongoing debate about the future of the game.

Players tend to put on-court issues to one side when it comes to their private lives. They understand that competition is bound to come with a spiky edge. It is what happens backstage – and particularly within tennis politics – that lingers.

Even Nadal and Federer, bosom buddies though they are, have clashed over political issues. In 2012, when they were both on the ATP Player Council, Nadal complained about Federer’s very Swiss neutrality. But it remains the only time, in almost 18 years of rivalry, that they have rowed in public.

Djokovic stayed away from tennis politics during this early period of his career. He owned “only” four majors at the time, and was still busy proving himself on the court. But when he did sign on to the ATP Player Council, in 2016, he soon began asserting himself. The two elder statesmen had stepped down by this stage, but must have wondered if they had erred by leaving Djokovic in sole charge of that forum, as he effectively became when Andy Murray also left in 2018.

Behind the scenes, 2019 was a particularly tense year. Nadal was openly critical of Djokovic’s insistence that the men’s tour needed new leadership. Another sore point arose when Djokovic argued against a donation from the ATP player fund to the Mallorca floods – a very personal cause for Nadal.

Djokovic’s abrasive qualities are as evident in his political career as they are in his tennis. In every facet of his life, he wants to be “the man”. Not only the man who has won more consistently than anyone else, but the man who led his peers out of the wilderness into a brighter, better-paid future.

His supporters see this as selfless and admirable. Others feel that he has a remarkable knack of turning every issue into a debate about himself. There might be three players in this marriage, but only two of them see eye to eye.