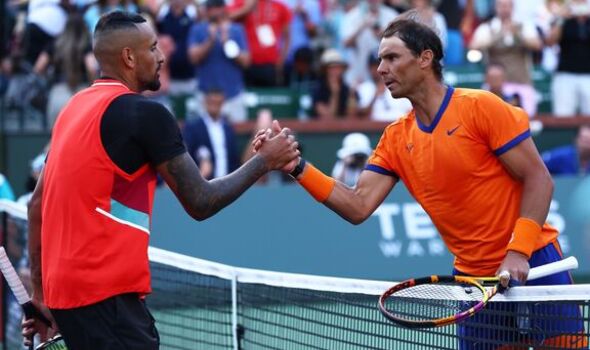 Rafael Nadal gave his assessment of Nick Kyrgios after defeating the feisty Australia at the Indian Wells Masters last night. The Spaniard prevailed 7-6(0), 5-7, 6-4 in just under three hours to advance to the semi-finals of the tournament for the first time since 2019 and the 11th time in his illustrious career.

Nadal trailed by a break in the opening set and faced two break points in his first service game of the decider, but locked in to surge late in both sets to advance. In the process, the 35-year-old extended his unbeaten record this season to an impressive 19 matches.

Despite some uncharateric errors at times from Nadal, he was able to find his best tennis when it mattered most, as he explained after the feisty encounter. “I think for moments I played well,” he said. “It’s difficult to play against him, always tough because he changes the dynamic of the point very quick and his serve is huge, especially the first serve.

“I think I played a good third set. Returning better. I was solid with the serve; I just suffered in one game with my serve. Nick is one of these kind of players that you’re going to have problems when he’s motivated. Tennis is all about the momentum sometimes,” Nadal added. “After the way that I finished the second with a couple of mistakes, I knew the beginning of the third will be so important and probably critical for me.”

After the big-serving tennis star wrestled control of the match once again in the second set, Nadal buckled down and tried to find a solution to the Kyrgios challenge, which he did in phenomenal fashion. “I decided to move in a little bit more, to try to change a little bit his visual position, try to create something different on him,” Nadal added.

“So I needed to save the first couple of games, and then the match came back to normal and anything can happen.” After committing an error to set up break point for Kyrgios, the Australian produced a superb backhand flick to win the second set.

“I think it worked. I was able to be quick with the hands, had some great returns on the first serve. It’s all about finding the solution in every moment. In this sport it’s not only about how you feel comfortable. It’s about how you can make your opponent feel uncomfortable, too.”

The tennis legend will face Carlos Alcaraz in the semi-finals, who is the soon-to-be Spanish number two and the future of not only Spanish tennis but worldwide. It is sure to be some clash with Nadal looking to extend his unbeaten run in 2022.