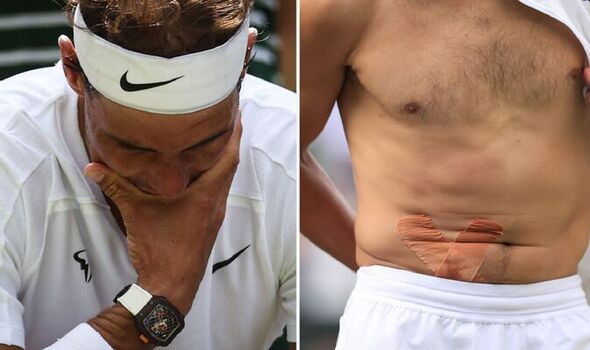 Rafael Nadal appeared ‘extremely concerned’ about his abdominal injury in the aftermath of his Wimbledon quarter-final win over Taylor Fritz, claims Andrew Castle. Nadal is expected to undergo scans after overcoming a stomach muscle issue to edge a sublime five-set win over the American courtesy of a fifth-set tiebreak.

But the Spaniard was unable to provide clarity on the severity of the issue when speaking after his 3-6, 7-5, 3-6, 7-5, 7-6 (10-4) win on Centre Court. As such Nadal could not offer any guarantees he will step on to court to face Nick Kyrgios in their scheduled semi-final on Friday.

The 22-time Grand Slam champion even admitted he considered retiring in his four-hour, 20-minute clash with Fritz. And the BBC’s lead commentator Castle commented after Nadal’s on-court interview: “It sounded to me although he’s come through the match, I think that he’s extremely concerned, as you would be, about the injury.

“Pat Cash is still with me. That sounded like he’s already thinking, ‘Am I going to be OK?'” Cash added: “I think what he’s going to do is get assessed pretty quickly. Yes he didn’t serve as well and move as well as he’d have liked. 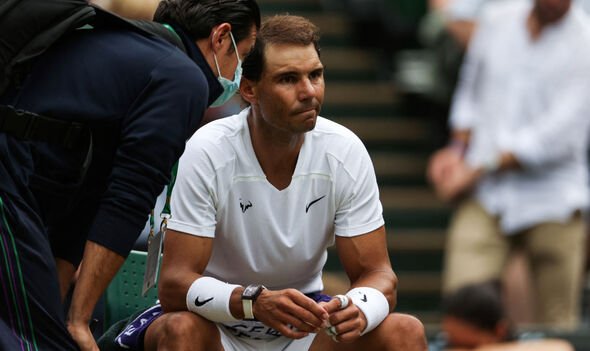 “Sometimes these things are more simple than they appear. You can get massaged through the area, around the area, and it can loosen everything up. I think he’ll take precautions. He’ll go and have a scan on it and he may be able to have an ultrasound scan here at the [All England] Club now, they’ve got quite a medical team.”

Nadal admitted, as footage caught on camera suggested, that his father told him mid-match he should retire from the match. And the 36-year-old says he’s concerned about his fitness ahead of Friday’s semi-finals, with British No 1 Cameron Norrie facing top seed Novak Djokovic in the other final-four clash. Nadal said: “It’s [retiring is] something that I hate to do. So I just keep trying, and that’s it.

“I’m playing great. I am enjoying a lot. The level of tennis, if we put away the problems – something that’s difficult, the feeling that I am having with the ball in my hand is honestly great.

“I am feeling myself playing very well. Now I’m worried honestly. That’s part of the business, too. Even if I did a lot of efforts to play this event in all ways, abdominal is not a thing that comes to play on grass. Can happen in any surface.”

Nadal owns a 6-3 head-to-head record against Kyrgios and has won all of their last three meetings. The pair famously first met at Wimbledon in 2014 when the Australian won a round of 16 tie on his SW19 debut – this is the first time he has got past the quarter-finals since then. The last time the two met at the Championships was in 2019 when Nadal won in four sets.

The pair have a famously frosty relationship and after Kyrgios won a Mexican Open clash in Acapulco that same year, Nadal said: “He’s a player who has enormous talent, could be winning Grand Slams or fighting for the No 1 ranking. He lacks respect for the crowd, his opponent and towards himself. I don’t think he’s a bad guy, but he lacks a little respect for the public and the rival.”