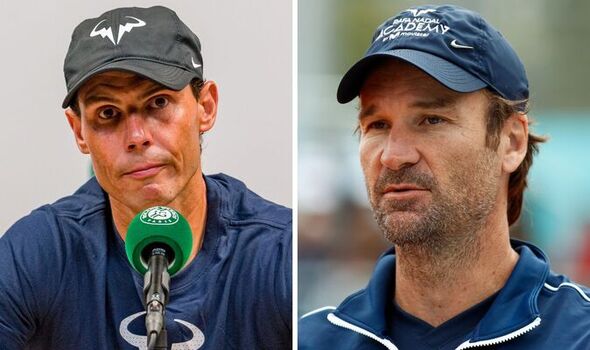 Rafael Nadal’s coach has given his thoughts after the world No 5 raised retirement fears when he admitted he could be playing his “final match” at the French Open earlier in the tournament. Now into the final, the 13-time champion has since admitted that he never knows when his last match could be as a result of his chronic foot injury.

Nadal is into the French Open final less than a month after he limped off the court at the Italian Open following a three-set injury-stricken loss to Denis Shapovalov. The 36-year-old has sparked fears that retirement could be near as he claimed his quarter-final against Novak Djokovic could be his “final match at Roland Garros” and doubled-down on the comments after beating his rival in four sets.

“I have what I have in the foot, so if we aren’t able to find an improvement or a small solution then it’s becoming super difficult,” he said after the match. Despite his chronic foot issues, the fifth seed has found himself within one match of a record-extending 14th French Open crown and 22nd overall Grand Slam title.

And his coach Carlos Moya has quelled some of the retirement fears ahead of Sunday’s final, though remained coy on his charge’s future. “Honestly, I’m positive, but I don’t have all the answers,” he told L’Equipe.

Nadal fans have already received some reassurance after reports that he would be missing Wimbledon were denied. “Rafa will try everything within the limits to be at Wimbledon,” his long-time agent Benito Perez-Barbadillo said in response to the rumours.

And Moya isn’t the first person close to Nadal to share their belief that he would continue his career beyond the French Open, as his uncle and ex-coach Toni recently claimed: “I am confident that this will not be his last Roland Garros.” The 61-year-old told Onda Cero: “I haven’t talked about it more than necessary with him. I hope he controls his problems and continues playing for some more time.”

Nadal himself has also stressed that his comments weren’t meant to signal an impending farewell, as he hoped to continue finding solutions for his Mueller-Weiss syndrome until his foot prevented him from competing altogether. “At no time do I want this to seem like a farewell. We will continue working to find solutions to what is happening down with my foot,” he told Spain’s RTVE channel.

“I trust and hope to be able to return. This last year has been difficult. Day to day, with everything that it entails, has been difficult not just because of all the effort but to stay competitive. And I play to be competitive. It’s what makes me really happy. We will keep thinking about the things we need to improve and the desire is to continue.”