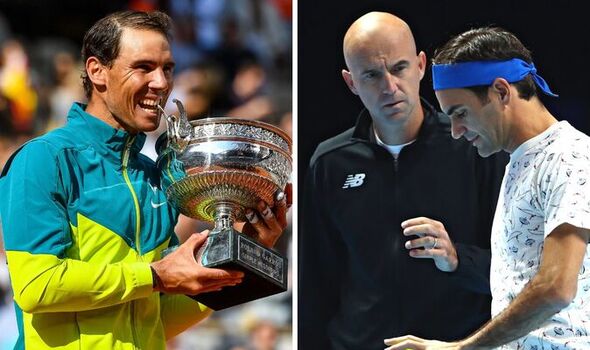 Roger Federer’s coach has congratulated Rafael Nadal on winning a record-extending 14th French Open title and called on the tournament to honour him. The Spaniard has also extended his lead over Federer and Novak Djokovic in the Grand Slam race, now holding 22 titles while the pair have 20 each.

Nadal became the oldest man to win the French Open on Sunday, when he won his 14th title in Paris and 22nd overall Grand Slam just two days after his 36th birthday. One man who was quick to congratulate him was the coach of one of his biggest rivals Federer, as Ivan Ljubicic called on the tournament to honour the Spaniard.

The retired former world No 3 took to Twitter, saying: “Not many PLAYED 14 @rolandgarros tournaments. He won it 14 times. There is no word to describe this feat.” And the Croat admitted that the French Open’s current tribute to Nadal – a statue on the grounds – was “not enough” as he made a huge request.

“Don’t think good old Phillippe would mind if his court changes the name to Rafael Nadal – statue is not enough,” Ljubicic added, claiming the tournament’s main showcourt – Court Philippe-Chatrier – should instead bear the name of the 14-time champion.

The world No 5 already has a court on the ATP Tour named after him – a rarity for an active player as it’s an honour usually reserved for those who have ended their careers. The main ‘Pista Rafa Nadal’ showcourt at the Barcelona Open is named after the Spaniard, who is a 12-time champion at the ATP 500 tournament.

Messages of congratulations for Nadal have been pouring in along with Ljubicic’s tweet, as the 36-year-old’s young compatriot Carlos Alcaraz wrote: “Simply amazing. CONGRATULATIONS.”

Nadal’s beloved Real Madrid also paid tribute to the Spaniard just eight days after winning their 14th Champions League in Paris, noting the similarity of the world No 5 winning his 14th French Open.

“Congratulations on this historic feat, @RafaelNadal. It’s an honour being able to enjoy a great madridista and honorary club member as the best tennis player of all-time. Congratulations on your 22nd Grand Slam, your 14th @rolandgarros title, without doubt a magic number in 2022,” the club tweeted.