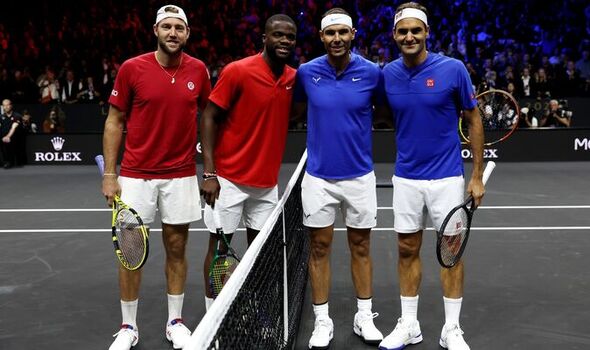 Taylor Fritz has shared his frustration after his Laver Cup teammates Frances Tiafoe and Jack Sock received “hate” for beating Roger Federer in the Swiss star’s final match. The 41-year-old retired at the team competition last month, joining forces with Rafael Nadal in the doubles for his last dance and narrowly lost in a match tiebreak.

Federer ended his 24-year career at last month’s Laver Cup, announcing his retirement the week before after spending 14 months sidelined by his ongoing right knee injury. The 103-time title winner played one last match alongside his long-time rival Nadal in the doubles, facing Team World’s Tiafoe and Sock.

Despite barely playing for the last two years, Federer took the first set with Nadal and had a match point on his serve in the first-to-ten-point tiebreak but the duo just lost 4-6 7-6(2) [11-9]. The 20-time Grand Slam champion was not concerned about the final result and enjoyed a special ceremony to honour his career after the match.

But it now appears that some weren’t happy with Sock and Tiafoe for beating Federer in his last match, with Taylor Fritz admitting he wasn’t happy to see they received “hate”. Speaking to the New York Times, the world No 8 said: “I was pretty upset to see how much hate Frances and Jack got for winning the match and Frances got for hitting Roger or hitting the ball at Rafa at net.”

JUST IN: Alexander Bublik addresses claims he only plays tennis ‘for the money’

The top-ranked American also claimed that Federer himself would have been happy that the pair gave it their all in the match instead of giving him the win because of his retirement. Fritz continued: “This is not an exhibition. We are playing for a lot and for a lot of money.

“It bothered me a lot because I know Roger would have absolutely hated it if they just gave it to him.” Federer himself was in good spirits after the defeat, joking about it in an Instagram post in the days after the Laver Cup.

“But still, my retirement could not have been more peRFect and I’m so happy with how everything went. So don’t overthink that perfect ending, yours will always be amazing in your own way…”