Home » Tennis » ‘So stupid’: Kyrgios fumes over towels, umpire during US Open defeat

Nick Kyrgios lasted less than two hours at the US Open.

The Australian barely fired a shot as Spaniard Roberto Bautista Agut cruised to a 6-3, 6-4, 6-0 win on a hot and humid night in New York City.

Kyrgios forced just one break point in the match. Bautista Agut, in contrast, caused constant problems on Kyrgios’ serve. He broke the Australian to love in the third set; a rare feat against a lethal serve.

Outside of injury-forced retirements, it’s the lowest number of games Kyrgios has won at a grand slam match.

Kyrgios’ constant chatter between points and at the change of ends, during an otherwise uneventful match, was aimed at three targets.

The first was towel protocol. COVID-19 has stopped the tradition of ball kids bringing towels to players. Players leave their towels in all four corners of the court and must walk to the back of the court to wipe down between points. 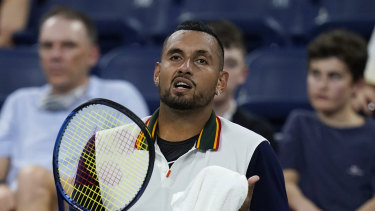 Nick Kyrgios is out of the US Open.Credit:AP

The match kicked off just before 11pm local time in New York, but conditions were clearly steamy. The mercury was just above 25 degrees and humidity hovered around 70 per cent all night.

It left Kyrgios sweating profusely and he caused offence when Bautista Agut was ready to serve early in the first set and the Australian was not ready.

At the change of ends, Kyrgios pleaded with chair umpire Carlos Bernardes to be reasonable.

As tensions simmered on the towel front, Kyrgios turned his attention to the two people in his box – manager Daniel Horsfall and girlfriend Chiara Passari.

“You’re the only two in here wearing a mask,” Kyrgios said. “I’m looking at you and all I see is a mask. I can’t understand what you’re saying.”

The 26-year-old was also seething about Stefanos Tsitsipas’ controversial bathroom break in his clash against one of Kyrgios’ friends on tour, Andy Murray.

Tsitsipas left the court at the end of the fourth set for a bathroom break that stretched to almost eight minutes. Murray said he had “lost respect” for the Greek star. Kyrgios clearly agreed.

Kyrgios’ attention was on towels, Tsitsipas and his box, while Bautista Agut focused on progressing to the second round.

The Spaniard is known for his ability to reach ball after ball to force opponents into errors.

That’s how he deconstructed Kyrgios’ game, breaking the Australian three times in the final set on his way to a win identical to the last time the pair met, at the ATP Cup last year.

Kyrgios’ career is approaching a crossroads. His form since Wimbledon has been dismal, winning just one match.

He will soon return to Australia for some time off and prepare for his home grand slam. He needs to make a run into the second week at Melbourne Park to reinvigorate a return to the court which has lost momentum in the last two months.