Home » Tennis » Sorry, tennis fans, but Nick Kyrgios is not the worst thing in the world right now

Right now, the world’s properly askew, isn’t it? Yeah, nah, let’s be brutally honest; the whole planet’s in the toilet.

I mean, this COVID-19 pandemic seems like it’s on an endless loop. The price of petrol has blasted through the stratosphere. Vladimir Putin has removed the last remaining layers of doubt over whether he’s the madman we all thought he could possibly be. And then we’ve got Wimbledon …

And as for the august All England Lawn Tennis and Croquet Club, what’s its reaction to the state of the (dis)union? To ban all Russians and Belarusians from SW19, lest otherwise the club’s patron, HRH The Duchess of Cambridge, be photographed this weekend as she squeamishly surrenders the Venus Rosewater Dish to Victoria Azarenka, or hands any silverware over to Daniil Medvedev.

If there’s one club and tournament, across all sport, still possessed of and driven by a warped sense of priority, it’s surely the All England Club and these venerable Championships. The exclusion of Russian and Belarusian athletes can be explained; it can’t, however, be accepted.

The inexplicable and dull stuffiness of the entire Victorian-era white clothes edict. The prioritisation of British royalty. Decisions made based on how things might look, instead of organising what’s supposed to be the biggest tennis tournament in the world.

The exclusion of some of the best players in the world to compete despite those players’ own personal misfortune in hailing from a place that instigated (or supported, in the case of Belarus) an unjustifiable, deadly and despicable conflict against a neighbour. It’s all a bit of nonsense, really. 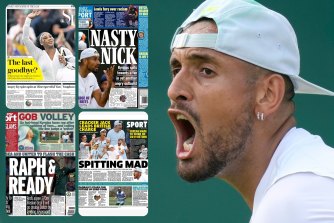 And it’s against this backdrop that I recall something I wrote in 2017. At the time, Nick Kyrgios had developed, almost overnight, a peculiar penchant for mooching around at tennis tournaments during that Australian summer, resplendent in a black t-shirt emblazoned with a gargantuan photo of Donald Trump’s face, snapped in an instant of uber-smug afterglow.

“The Donald’s” face had been embellished with devil horns and a red clown mouth; his eyes were scratched out. The photo was captioned with “F— Donald Trump”.

I at the time mused that Kyrgios’ shenanigans, up to that point in his career, had served to alienate just about everyone. I concluded that “I shan’t be falling in love with Kyrgios again, ever. I wish him no ill will, but he just doesn’t matter to me”.

I’d formed this brittle opinion before then. The 2016 French Open, and Kyrgios’s involvement in it, being a standard-bearer. Episodes of bellowing at ball boys, slandering umpires as being guilty of “unbelievable bias” (whatever that particular threshold of bias is), and his all-round ferociously boorish behaviour, displayed as a diversion to being comprehensively thrashed at tennis. 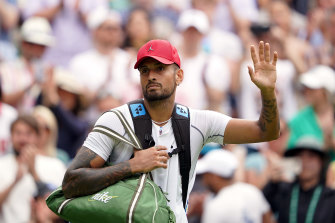 Nick Kyrgios dares to wear a red baseball cap after his fourth-round match at Wimbledon this week.Credit:AP

In October that year, four months or so after Kyrgios removed himself from consideration for selection in the Australian Olympic Team because he knew the AOC would refuse to select him on behaviour grounds, Kyrgios was then banned from the men’s ATP tour for “conduct contrary to the integrity” of tennis.

Kyrgios was sanctioned because he tanked a match. Didn’t try. Objectively unforgivable conduct from any professional athlete, in any sport, at any time.

But with all of this said, you know what? I actually reckon I was, to paraphrase The Fonz, w…wrr…wrrooon... What I mean to say is that Nick, I’m ss…ssooorr... OK, at the very least, I reckon I’ve changed my mind a bit.

There’s not a great deal to be achieved in being so pious about all of this; Kyrgios’ antics and what-not. There’s too many actually serious things going on in the world for us to start dancing around too much about issues which perhaps aren’t all that serious at all.

Indeed, how much should we care if Kyrgios spits, swears, dares to wear red at Wimbledon, and otherwise generally just carries on a (fair) bit too much? Is all of that just Kyrgios’ fascinating, white-line-fever mayhem, and his own brand of gamesmanship, which should be appreciated for what it is.

Or instead, is it the “evil side” of Kyrgios that manifests itself as actual bullying, as decried by the vanquished Greek, Stefanos Tsitsipas, himself anything but an angel in the choirboy-conduct department?

Or is the 1987 Wimbledon champion Pat Cash correct, in labelling Kyrgios’ carry-on as akin to flat-out cheating?

It should go without saying that we’re talking about on-court matters here, completely separate to this week’s revelations that Kyrgios will face a Canberra court next month following allegations he assaulted a former partner.

After all, Kyrgios’ actions in labelling chair umpires as “dumb” and a “disgrace”, and refusing to continue play, does have a distinct flavour of the Canberran carrying on like an Olympic-class pillock.

I’ve mellowed regarding Kyrgios. Not completely mind you. Analysing things through any sort of objective lens, Kyrgios’ high-spirited mischief doesn’t really rate on the atrocity-meter. Perhaps he can’t quite help it, infected with a healthy dose of that white line fever. On the flipside, maybe it’s mainly purposeful and rehearsed.

Just because Kyrgios appears to be the antichrist to his revered contemporaries Rafael Nadal and Roger Federer, that doesn’t mean that he shouldn’t just be accepted, appreciated even, for who he is and what he brings to the sport. He’d probably be the most Googled player in the game right now.

Yet there isn’t a single player today who’s analysed from their perspective and character, in the same way Kyrgios is. The coverage of him wearing a red baseball cap, as a case in point, was hysterical.

Much of what’s thrown at Kyrgios is deserving and self-inflicted. But Kyrgios isn’t all bad either; one reasonably suspects he would be a fascinating dining companion.

Could it be that it’s the All England Club and tennis which is in the dark ages regarding all of this, whereas Kyrgios represents the wormhole to the future of the sport? That new point in spacetime of course mightn’t be where the Cliff Richard sing-along types want to go. But how long is it anyway, since Wired for Sound appeared in the charts?

And woe betide poor HRH Princess Kate should have to hand the Gentlemen’s Singles Trophy to Kyrgios, and not Daniil Medvedev. Oh, the embarrassment.

Watch all the action from Wimbledon ad-free, live & on demand on Stan Sport, with Centre Court matches streaming in 4K UHD. Coverage of select matches commences on 9GEM from 9.30pm AEST each night.