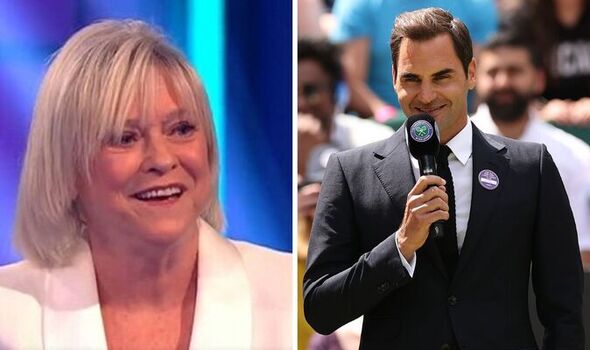 Sue Barker has recalled what she told herself while presenting her final Wimbledon this summer, as the British icon admitted she didn’t want to “do a Roger Federer” after revealing what the 20-time Grand Slam champion had previously told her about his own memories from the tournament. Barker stepped down from her role as the anchor of the BBC’s Wimbledon coverage this year after more than two decades at the helm.

Barker presented her final Wimbledon for the BBC this year after joining the broadcaster as one of their tennis presenters in 1993 before becoming the anchor of the tournament’s coverage in 2000. Following her final year at the helm, the 66-year-old has now received theLifetime Achievement Award at BT Sport’s Action Woman Awards.

And during her victory speech with fellow Wimbledon presenter Clare Balding, the former world No 3 recalled what she told herself while presenting the centenary celebrations on Centre Court during The Championships this year as she was left in tears when her co-hosts called on the crowd to give her a standing ovation, explaining why she told herself she didn’t want to “do a Roger”.

“I remember all the champions were there and I was really crying because the more they cheered, the more I cried,” she said, referencing the centenary ceremony which saw a whole host of former Wimbledon champions line up to celebrate 100 years of Centre Court. Laughing, she added: “And I looked over at Roger because let’s face it, why wouldn’t you?”

While crying, Barker found herself reminded of something that the eight-time Wimbledon champion had told her in the past about his own greatest memory from SW19 – winning his first Grand Slam title in 2003. She continued: “And I looked over at Roger Federer and I remember every time I’ve interviewed and I always ask him ‘What is the best moment of your career?’

“He said ‘Winning my first Wimbledon, it’s what I dreamed of.’ And he said ‘But you made me cry and all I have is I’m blubbing and that’s all my memory.’ And I looked at him and I thought I’m not going to do a Roger,” she laughed.

Mimicking sobs, the 1976 French Open winner added: “I can’t walk away [crying] like this but you [Claire] made me cry on the last day with all your lovely words.” The tennis-played-turned-broadcaster also shared her appreciation for Balding, with the presenter set to continue her role in the BBC’s coverage.

“I know I’m leaving it in the safest hands, it’s absolutely wonderful to leave it with Clare,” she said after accepting the Lifetime Achievement Award. “But also Claire, this year at Wimbledon, myself, you and Isa Guha. To have three women presenting Wimbledon for the first time ever.”