The opening day at Melbourne Park came with an element of shock – COVID-19 trepidation, ticket prices and a February timeslot all seemingly impacting on crowds – but sunnier Melbourne skies on Tuesday seemed to contribute to a bit more of a brighter outlook.

But fan numbers at the Melbourne Park precinct appeared comfortably down on the 30,000 limit allowed each day at the Open during its first week. 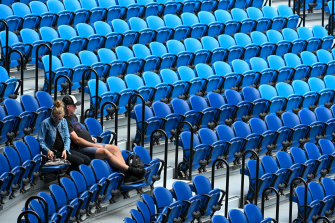 The crowds have been noticeably down on days one and two at the Australian Open this year.Credit:Eddie Jim

The official attendance for both sessions at Melbourne’s tennis HQ on Monday was 17,922, close to a quarter of the number of spectators who walked through the turnstiles on day one of the event last year. But that was a world away from the circumstances of hosting top-line sport in Melbourne in 2021. The lack of a school holiday timeslot again had a significant impact.

On Tuesday, with the temperature slowly heating up in Melbourne, fans enjoyed the surrounds and there was a slightly more noticeable roar from the stands after the big moments.

The official crowd for day two was not due to be released much closer to the end of play on Tuesday as Tennis Australia manages the constraints of hosting crowds in three different zones.

There was a scare on one of the outside courts when a ballkid became unwell early in the day.

A tournament spokesperson said the girl was immediately attended to by the medical team on court 16 and was resting at home as a precautionary measure. She will return to her duties later this week.

The stark reality for crowd demand was highlighted by Nick Kyrgios’ first round situations this year and last.

Last year, the demand to watch him was so high that keen punters would begin joining the queue at least an hour before he was scheduled to play.

About the same number of people attended Alex de Minaur’s first round match against eccentric American Tennys Sandgren on Tuesday.

Attendance figures for even the biggest stars – Novak Djokovic, Rafael Nadal and Naomi Osaka – haven’t been any better.

Only about 1000 people attended Osaka’s opening-round match, triggering questions about the lacklustre crowd.

TA is hopeful momentum will build and crowds will be near 50 per cent capacity this weekend.

The corresponding weekend in last year’s tournament was an Australian Open record, as more than 94,000 people rolled into Melbourne Park.

Television ratings for the opening tennis major are also down.

Australian broadcaster Nine forecast ratings would fall after the tournament was pushed back to February.

While there is still time for ratings to lift, the peak audience for Kyrgios’ first match indicate the forecast will come to fruition.

The peak figure was down almost 25 per cent from Kyrgios’ first round win over unknown Italian Lorenzo Sonego last year.