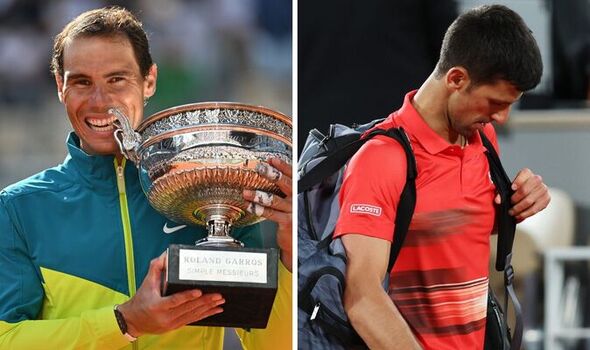 Tim Henman has admitted Rafael Nadal has swayed him away from Novak Djokovic when discussing the Grand Slam race following the Spaniard’s title win at the French Open. The 36-year-old extended his all-time men’s Major record to 22 titles, extending his lead over Djokovic and Roger Federer who have 20 each.

Nadal broke his own records following his 6-3 6-3 6-0 win over Casper Ruud in Sunday’s French Open final. As well as becoming the tournament’s oldest male champion two days after his 36th birthday, the Spaniard also extended his record to 14 French Open titles and 22 overall Grand Slam trophies after winning his 21st in Melbourne at the start of the season.

It means he pulls further ahead of Djokovic and Nadal, who remain tied on 20 with their rival now on 22. And Henman has now confessed that Nadal’s latest victory has made his change his mind on who would finish with the most Grand Slams, having previously backed the Serb to end his career with the record.

“In terms of who’s going to end up with the most Grand Slams. Couple of years ago I would’ve said Djokovic for sure,” the former world No 4 told Eurosport. “Right now with that little bit of distance, I think Nadal has got a great chance.”

The retired pro also claimed the world No 5 could win Wimbledon in less than a months’ time if he was fit and healthy, and decided to compete. His comments came after Nadal told Henman and the Eurosport team that he played the final with his foot “asleep” after receiving “injections” to the nerve to dull the pain his chronic foot injury causes him.

The newly-crowned French Open champion is in doubt to play Wimbledon – which begins in just three weeks – as he continues to struggle witn the injury. But Henman said: “I mean if Nadal is healthy, which is a big challenge now with his foot injury, can he win Wimbledon? Absolutely.”