A running feud with a chair umpire saw Nick Kyrgios refuse to play at a critical point in the second set of his second round win at the Murray River Open. 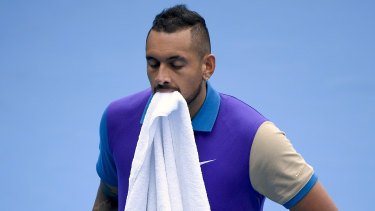 Nick Kyrgios was furious after receiving a time violation.Credit:AP

“Every technique is different. I want to hear [an explanation].”

Kyrgios then made his comments personal.

“Tennis is about the umpires, right? You guys are in charge,” he said. “You’re an extra for all of this.”

When the supervisor emerged, Kyrgios continued his tirade.

“I saw the clock, it was at 3, 2, 1 and I’m pulling my serve here and he called a time violation,” he said. “Tennis isn’t about him. He’s an extra so all this shit goes smoothly. He’s a smart arse and now I have to get fined for it.

“I have to go back and forth to get my towel.

“Why do these guys think it’s about them?”

Whether Kyrgios would be fined for the incident was then his chief point of concern.

When returning to the court, he explained to Bourchier: “I’ve lost enough money to these peanuts.”

Kyrgios knows Bourchier’s game inside out and it showed. He broke the world No. 303 twice in the first set, which took just 27 minutes.

Kyrgios slapped cross-court forehand winners, had his first serve ticking over at around the 220km/h mark and was able to settle into long rallies better than he did in the first round.

The deft touch he lacked in the first round – during which he sent several drop shots into the net – returned, too.

Even the left knee issue – which the star Australian admitted had been giving him grief for a “long time” after his first round win – seemed to evaporate in the opening set.

The second set was less straightforward. Bourchier matched some of Kyrgios’ stunning first set winners with some brilliant shot-making of his own.

His elite record in tie-breaks then paid dividends as he saved three set points with some superb shots before closing the match.

Kyrgios must now turn his attention to his first serious test of the summer – Croatia’s Borna Coric.

The 24-year-old is ranked higher than Kyrgios at world No.25 and played well in last year’s ATP Cup.

Apart from the first round first set blemish against Alexandre Muller, the standard of tennis Kyrgios has played hasn’t been far from the level which carried him to the second week of last year’s Australian Open.

To beat Coric, Kyrgios will need to maintain that standard.