Home » Tennis » ‘Too many injuries’, but Djokovic has the stomach to win

It was all about guts as No.1 seed Novak Djokovic prevailed over sixth-ranked Alex Zverev in their quarter-final, the highest quality match of the Australian Open.

Guts, both as in intestinal fortitude and physical wherewithal, since Djokovic has an ill-defined but obvious complaint and Zverev was wearing a patchwork of bandages on his abdomen. At his lowest moment, Djokovic sat down at the back of the court while Zverev changed a racquet. Literally and figuratively, he rose again. The final score was 6-7, 6-2, 6-4, 7-6. 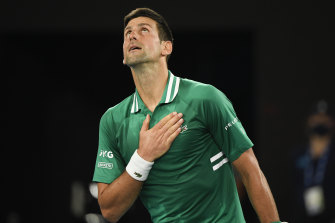 Novak Djokovic celebrates after advancing through to the semi-finals at the Australian Open.Credit:AP

“Too many injuries,” Djokovic said when done. He was lamenting on behalf of many.

“I’m just hoping this is all temporary, so we can be back to what we used to do, without interruption,” he said. “Quarantine … the amount of injuries show how much effect it has had on players’ bodies. It has taken a toll on all of us.”

Expanding later, Djokovic said the majority sentiment in the locker room is that players do not want the season to proceed if quarantine is non-negotiable. He catalogued the leading players who have struggled here: himself, Rafael Nadal, Zverev, Grigor Dmitrov and Matteo Berrettini, to start with.

“What we’re seeing now is not normal,” he said. “Top players are the ones who are the fittest. It’s been proven that’s the case.”

Djokovic said he had not practised between his last match and this, and would not practise before his semi-final against mystery Russian Aslan Karatsev, the first player to reach a major championship semi-final at the first attempt. Djokovic had never seen him play before this tournament.

Zverev won the first set of this match and had points for double breaks in the third and fourth, but somehow came away empty-handed. It leaves him where he has dwelled for the last few years, as the next man, the nearly man, but not yet the man. Djokovic was gracious. “If he was to win this match, it wouldn’t have been undeserved,” he said.

Lasting more than three-and-a-half hours, it was a match in which momentum fluctuated throughout, and with it emotion. No doubt it prompted a virtual standing ovation. 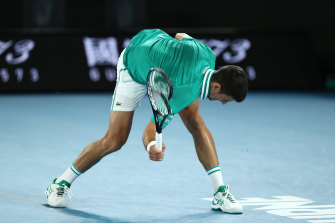 Novak Djokovic smashes his racquet on the court.Credit:Getty Images

But it was Djokovic, defying appearances, who rose like Lazarus. “I regained my focus after I broke that racquet,” he said, a little sheepishly. “Things started to shift for me in a positive direction.

“It was a relief for me, but I would not recommend this kind of relief-channelling. Of course, I’m not proud of it. I have my own demons to fight with, and I’m sure that everyone else has theirs, too, and has their own way of fighting them. I don’t intentionally do it. Today, it actually helped.”

Exploiting a rare pair of Zverev double faults, he surged on to win the last five games of the set. Now it was Djokovic who roared. That would have tested any weakness in his thorax.

Still the contest refused to regularise. Zverev had three points for a two-break in the fourth set, and Djokovic then appeared to be missing the spur of a stadium in ferment. He glared at his support crew, a proxy. But Zverev didn’t take his chances, and Djokovic levelled.

Somehow, when fatigue should have shown, the standard rose. Against likelihood, Zverev held a point to take the match into a fifth set. It was his last hurrah. It went to another tie-breaker. Djokovic’s fastest serve of the night took him to his first match point, and although Zverev saved it, a Djokovic ace put an end to it. As noted by Djokvic, he actually out-aced Zverev on the night.

“There was nothing in it,” he said. “There were a lot of nerves, a lot of pressure. Emotionally, I feel a little bit drained.”

Relieved, Djokovic made his usual four-points bow the phantom crowds. It was a little comical, but it was the last laugh.