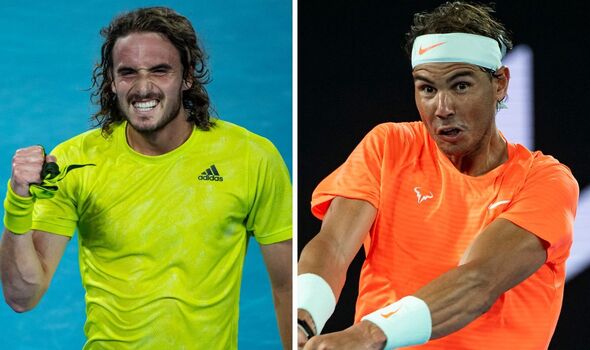 Stefanos Tsitsipas has opened up on the lesson he learned from beating Rafael Nadal at the 2021 Australian Open, two years after their first meeting at the hard-court Grand Slam. The world No 4 explained how he managed to defeat the 22-time Major champion from two-sets down, claiming it felt like a “drug” when he managed to pull off the victory.

With the 2023 season and the Australian Open fast approaching, Tsitsipas has been reflecting on one of the defining moments of his career that came in Melbourne Park. The 24-year-old reached his first-ever Grand Slam semi-final at the Aussie Open back in 2019, defeating Roger Federer en route when he was aged just 20.

But the Greek star ran into trouble when he faced Nadal in the last four as the Spaniard crushed him 6-2 6-4 6-0. Tsitsipas got his revenge two years later in the quarter-final when he found himself two sets down to the world No 2 once again but stormed back to win 3-6 2-6 7-6(4) 6-4 7-5 and he has now looked back on the match, which felt like a turning point.

“There were two times when I found myself in the same situation with the same opponent, but [it was] a different Stefanos each time,” the nine-time title winner told RedBull.com. “The first time I faced Rafael Nadal at the Australian Open in the semi-finals I was really impatient.

JUST IN: Raducanu ‘pleased’ despite Jabeur loss as Brit shares her relief

“I remember thinking, ‘Okay, I’m playing against one of the best. I really need to prove myself with big shots and go for it. Two years later, I faced him again at the same tournament, this time in the quarter-finals. After going two sets down, I understood what I was doing wrong.”

Explaining the realisation he came to while staring down the barrel of defeat, the world No 4 continued: “I remember coming to an agreement with myself, saying, ‘Okay, you’re going to become patient. You’re going to wait. You’re going to spend every single minute on the court enjoying the play and just make it a fun game’. It turned out to be one of the best comebacks in my career so far.”

Asked how the victory made him feel, Tsitsipas responded: “It felt like I was in a cage and someone decided to unlock it. I suddenly felt free. Every decision I went for felt right. It’s what I like to call flow. I was able to reach that flow by decreasing my expectations.

“It was a pure fight. It was all mental. It was excruciating, physically and mentally – I don’t think I’ve ever played at such high focus levels for so long. Everything felt like it made sense. It’s like a drug when you’re able to experience it – it brings you to another level. You’re not playing with your skill any more, you’re playing with your soul.”