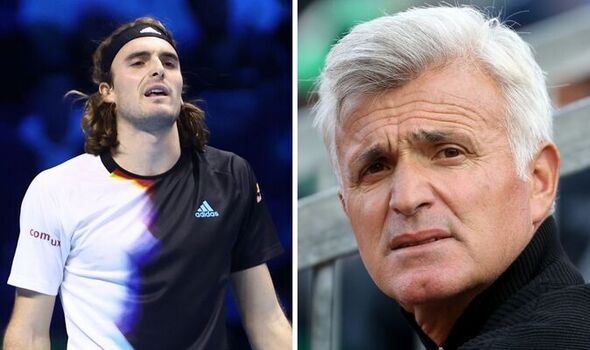 Iga Swiatek’s mental coach has waded into the debate surrounding Stefanos Tsitsipas’ parents after Jim Courier called for the family to get “therapy” following an incident at the Greek’s ATP Finals match on Friday. The world No 3 crashed out to Andrey Rublev in the group stage, whacking a ball in the direction of his parents after they had a spat in his player box.

Tsitsipas ended his season with a defeat to Rublev in the round-robin stage of the ATP Finals as both men were fighting for the last semi-final spot at the year-end championships. The second seed imploded in the final set as he lost 3-6 6-3 6-2, hitting back-to-back double faults in one game after his parents were spotted arguing in his box.

The 24-year-old also hit a ball in the direction of his box in frustration, and the ordeal led former world No 1 Jim Courier to call for the family to seek outside help as he told Tennis Channel: “It seems like they need a therapy session to figure it all out.” Now, the psychologist of WTA world No 1 Iga Swiatek has had her say in the debate as she sent a message to the Greek star’s parents.

“The first rule of a good sports parent – be able to manage your own emotions and your own stress. Even at the top level. #Tsitsipas,” Daria Abramowicz tweeted after the match. And the sports psychologist’s advice will be worth taking, as she has been the secret to Swiatek’s success.

JUST IN: Taylor Fritz slams fan for ‘disgusting’ act during loss to Djokovic

The Pole reached world No 1 this year at the age of just 20 and has three Grand Slam titles to her name, two coming this season at the French Open and US Open. Tsitsipas himself revealed earlier this year that he had been working with a psychologist since he was a child.

But some experts believe a different shake-up in his team – one that may involve ditching his father as his coach – could be the answer to help him reach his maximum potential. “We saw how he threw his serve away with two double faults, he got lost in the match when his parents started jawing at each other,” Courier also said following Tsitsipas’ loss to Rublev.

“I just feel for the kid because Stef seems like a good guy to me and he’s said time and time again he doesn’t want the input from the bench but they give it to him anyway.”