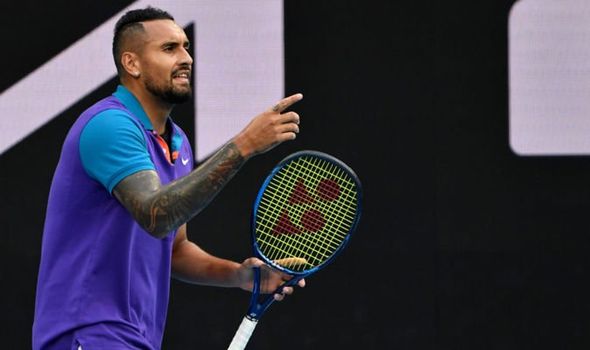 Nick Kyrgios put on a show as he raced into a two-set lead against Dominic Thiem during their Australian Open third round clash and Express Sport, via Eurosport, can bring you all the best shots from the opening exchanges.

Kyrgios’ composure came to the fore at the end of the second set when he delivered an underarm serve to go 2-0 up.

The Australian attempted several earlier in the match to mixed success.

But this effort was right on the money and Kyrgios took full advantage of Thiem standing way beyond the baseline.

It is always risky to use that shot at such a crucial moment in the match.

However, the showman in Kyrgios comes out on the biggest stages and he delivered this absolute peach.

One of those earlier underarm serve came in the fourth game of the second set and that really got Thiem rallied.

The Austrian raced towards the net in hope of reaching the ball but he fell just short.

However, Thiem made ammends on the very next point as he hit a return winner from Kyrgios’ big serve out wide.

Another great winner from Kyrgios came in the first set when Thiem pulled out one of his opponents’ tricks.

Thiem was running backwards past his own baseline when he produced a tweener.

But that was not enough to win the point as Kyrgios responded with a rasping forehand winner.